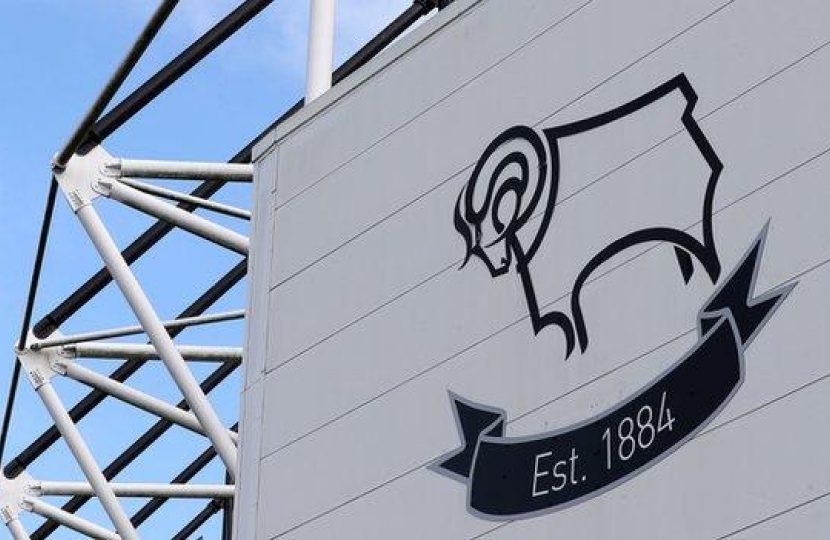 I share the very real concerns that have been expressed by Derby County supporters regarding the situation at the Club and want to assure you of my commitment to helping the Rams survive in the English Football League (EFL) past the arbitrary 1st February 2022 deadline.

While the governance surrounding the administration of Derby County is ultimately a matter for the (EFL), the administrator and the Club, my Parliamentary colleagues and I are united in our efforts to save the Rams and secure their future under new ownership.

To this end I was pleased to be present in the Chamber of the House of Commons on Tuesday afternoon (18th January 2022) for the Urgent Question tabled by fellow Derbyshire MP, Mrs Pauline Latham. Regrettably, as a Government Minister, I was unable to speak in this short debate, but nevertheless I felt it was important to be there to show my support for the Club.

In addition, I have personally met with the Parliamentary Under Secretary of State for Sport, Tourism, Heritage and Civil Society, Nigel Huddleston MP, to share with him the strength of feeling about the current situation and to detail the economic impact the loss of Derby County would have on many local businesses across our area, not least those operating in the hospitality sector.

I have been assured by Mr Huddleston that he has spoken directly to the parties involved, including representatives from the EFL to urged them to take a pragmatic approach to securing the future of the Club and continues to receive regular updates as the situations evolves.

Derby County FC - a founder member of the Football League and the first FA Cup winners after the War; a Club synonymous with the names Bloomer, Clough and Taylor - perhaps faces the most crucial week in its long history and I will use this time, working closely with my Derbyshire colleagues, to do everything in my power to secure a sustainable future for the Rams and their loyal supporters.