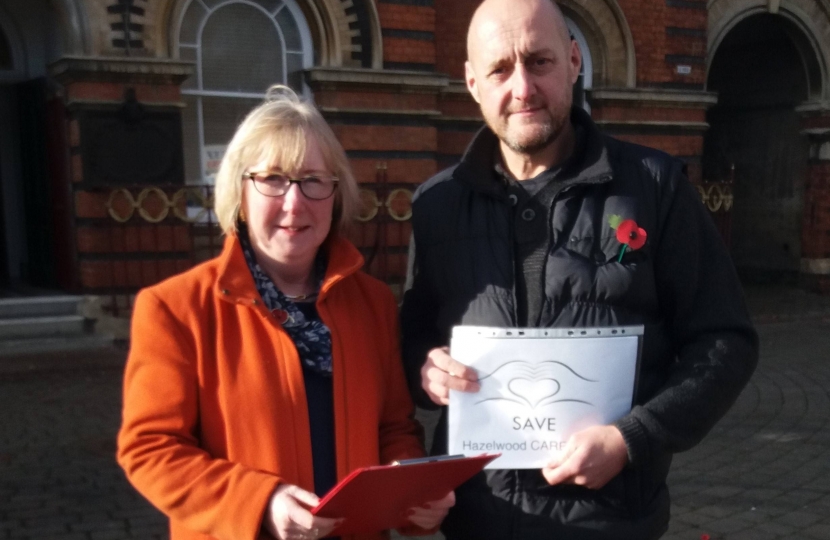 After a five month campaign during which Erewash MP Maggie Throup took the issue to the very top of Government, Derbyshire County Council has today announced that Hazelwood Care Home in Cotmanhay will remain open indefinitely until a brand new facility is built for the community.

Hazelwood, which is the last remaining local authority care home in Ilkeston, had been earmarked for closure after it emerged that the buildings needed significant investment to bring them up to standard. This follows years of neglect by the previous Labour administration who were ousted by the Conservatives in May 2017.

After taking up the fight on behalf of local residents, Maggie met with the Minister for Social Care Marcus Jones MP to discuss the situation, as well as holding a series of meetings and site visits with the Leader of Derbyshire County Council, Cllr Barry Lewis and the Cabinet Member responsible for Adult Social Care, Cllr Jean Wharmby, to look at other options for saving the Home.

In addition, Maggie also made extensive representations to the public consultation on Hazelwood’s future, on behalf of residents and the campaign group set up to save the Home.

“This is first and foremost a victory for our community.

“I have always been clear that Hazelwood should not close under any circumstance as it provides a vital service to the community in Contmanhay, with many residents relying on it to support relatives who are no longer able to be cared for in their own homes.

“Since coming to power in May, the new Conservative Administration has had to consider some tough choices to ensure that Hazelwood remains safe and warm for the residents who live there.

“This was a situation caused by a shameful lack of investment over many years by the previous Labour Council, and goes to the heart of a wider problem of their total mismanagement of adult social care across Derbyshire whilst in office.

“I would like to congratulate the local campaigners who took on this fight, as well as the County Council who have once again listened to the public and made the right decision by them.

“I now look forward to working with residents and the County Council as plans are developed to build a brand new Home for the community in Cotmanhay.”