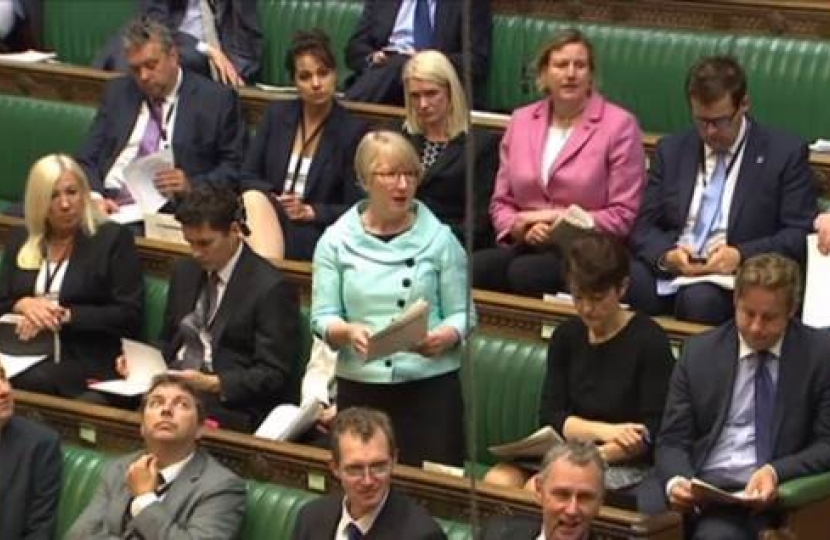 Erewash MP Maggie Throup has voted against a Bill which, if it had become law, would have allowed a terminally ill adult to choose to be provided with medical assistance to end their own life.

“Like so many who have taken the time to write to me on this subject I to have a personal story and some clear reasons why ultimately I took the decision to vote against the Bill.

“For as long as I can remember, my Mum said that we should, metaphorically speaking, 'shoot her' when she became a burden. Over the last few years of her life, Mum suffered from a progressive and life-limiting condition idiopathic pulmonary fibrosis which meant that for the last 12 months of her life she was dependent on oxygen to breathe.

“Yes, we could have found that virtual gun to end Mum's suffering but then she would have missed out on so many precious and irreplaceable moments during her final months.

“In fact the day before Mum passed away, two of her close friends visited her, and as they said afterwards, they all had a grand afternoon together.

“Mum obviously enjoyed her final day and it comforts me to know that, something which the Bill would undoubtedly have denied us all.

“But that's not the end of the story. Mum received amazing palliative care in her own home and at a Hospice in Yorkshire.

“In Erewash we are fortunate to have Treetops Hospice which provides end of life care in the patient's own home.

“The fact that Treetops does not have any beds but provides all its palliative care in the community means that it is helping so many more people to fulfil their wish of dying in their own home.

“We must do whatever is possible to make sure that the final wishes of those with terminal illnesses are met to ensure a good death. With 63% of people preferring to die at home but only 21% actually doing so, this is something which needs to be addressed.

“It is also important that those with life-limiting illnesses know that hospices are not just for people with cancer but do actually reach out to those with many other incurable conditions.

“The compassion and tenderness shown by every hospice worker I've ever met reassures me that those who are fortunate to receive their care, will have a good death.

“I believe it is vital that we ensure the hospice movement is appropriately funded but still able to keep charitable status. We must make sure that hospices can provides support for all who need it.

“There is another area that I feel needs to be addressed, with the onus on our healthcare professionals and that is around the very difficult subject of 'do not resuscitate'.

“I was with Mum when the palliative care nurse asked that all important question. Mum only hesitated for a few seconds before saying she wanted DNR in place - I could see the relief on Mum's face knowing that when the time was right, she would be allowed to pass away with dignity.

“But her definition of dignity was, I must stress, far different to that proposed by the Dignity in Dying campaign.

“One powerful message I received just before the debate began was from a local GPs, who said and I quote: “As a long serving Ilkeston GP, I have dealt with many situations where patients and families have wondered whether euthanasia is something they would do, but in the end have found their deaths can be managed in a way which brings peace and feels natural.”

“I believe that we must do more to support people at the end of their natural lives, but life itself is far too precious to be cut short artificially, and that is why voted against the Bill.”